This annual event provides audiences with the opportunity to discuss the history of Korean Cinema, its present and future with a selection of Asian Film specialists from the UK and Korea. 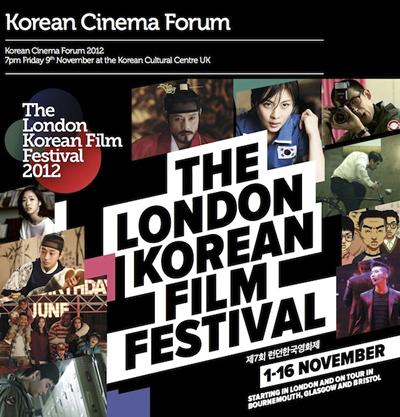 Tthe 7th London Korean Film Festival now bigger and bolder than ever thanks to the wonderful support the UK audience as shown the festival, and KCCUK, over the years.

This year we hope not to disappoint with an array of thrilling, funny, thought provoking and insightful films, totalling 33 amazing events. With the extravagance of our big features such as the Opening Gala, The Thieves, Architecture 101, Barefoot Dreams and As One, Korea there are also the small, more personal features such as White Night. This real treat is looks into the intolerances still existing in contemporary Korean society and the violence it can create.

Since the success of last year’s Animation section we have picked up a number of great animated features. Included in the section is PADAK, literary a fish out of water story, Katuri-A Story of a Mother Bird and one definitely not for children, King of Pigs. This violent, morality tale of youths battling against the oppressive rich kids has travelled to some of the biggest and best film festivals in the world including Cannes.

Following the banner sports year London has had, and the great success Korea had at the Olympics. We will be celebrating the inspirational sports dramas such as the true story of the first ever unified Korean table tennis team in 1986 starring HA Ji-won and BAE Doo-na in As One, Korea. We would also like to welcome back the Mise-en-Scene short film festival selection which has a number of fascinating films from up and coming Korean talent.

The 7th festival will also see the first no-Korean language film being screened in the Korean-Chinese co-production, Dangerous Liaison. Adapted from the 18th century French novel, the sensual and manipulative actions of its cast are transposed from the debauchery of the Paris Enlightenment era to the glamour of 1930s Shanghai.

As is with every year the festival will endeavour to take the best of the London selection on tour around the UK. This year we are pleased to travel to Bristol, Birmingham and Glasgow